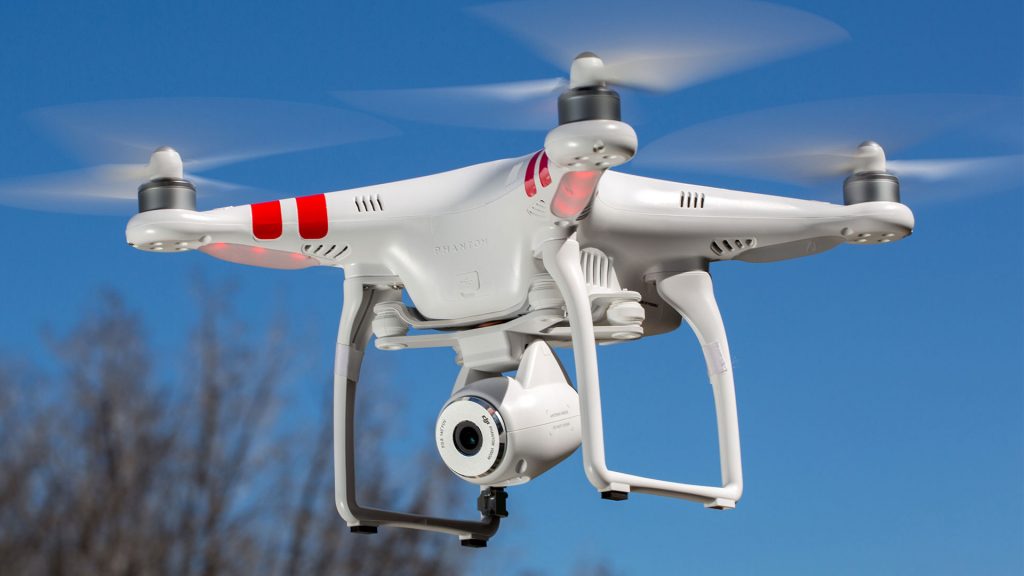 Drones or Unmanned Aerial Vehicle (UAVs) are the aircraft which are used to navigate without the help of the human pilot and is navigated by using a GPS tracking system. In contrast to the human-crewed aircrafts, the UAVs are majorly preferred especially in the military, scientific, agriculture and in aerial photography applications. In 2004, the first drone was used by the Central Intelligence Agency (CIA) for the targeted killing application. Novel technological advancements such as the implementation in the Universal Aerial Vehicles (or) drone in the military has been helping in the radar and in communication relay applications.

Precision weapon delivery for the surface targets uses in many other military applications such as surveillance, target acquisition, information and reconnaissance are boosting the usage of drones from the past decade. Nowadays, technological developments in agriculture sectors had started utilising the drones for increasing crop production and monitoring crop growth with the help of the sensors and digital image processing capabilities. The implementation of electronic gadgets in the drones has been helping farmers to monitor the crop crystal clearly and to eradicate & overcome the irrigation, soil variation, pest and fungal infestations challenges. Drones are used to capture and shoot videos in events and concerts and are gaining popularity in the film industries for the top view of the location, and key players are offering the integration and maintenance services which are primarily driving in the growth of the drone services market. 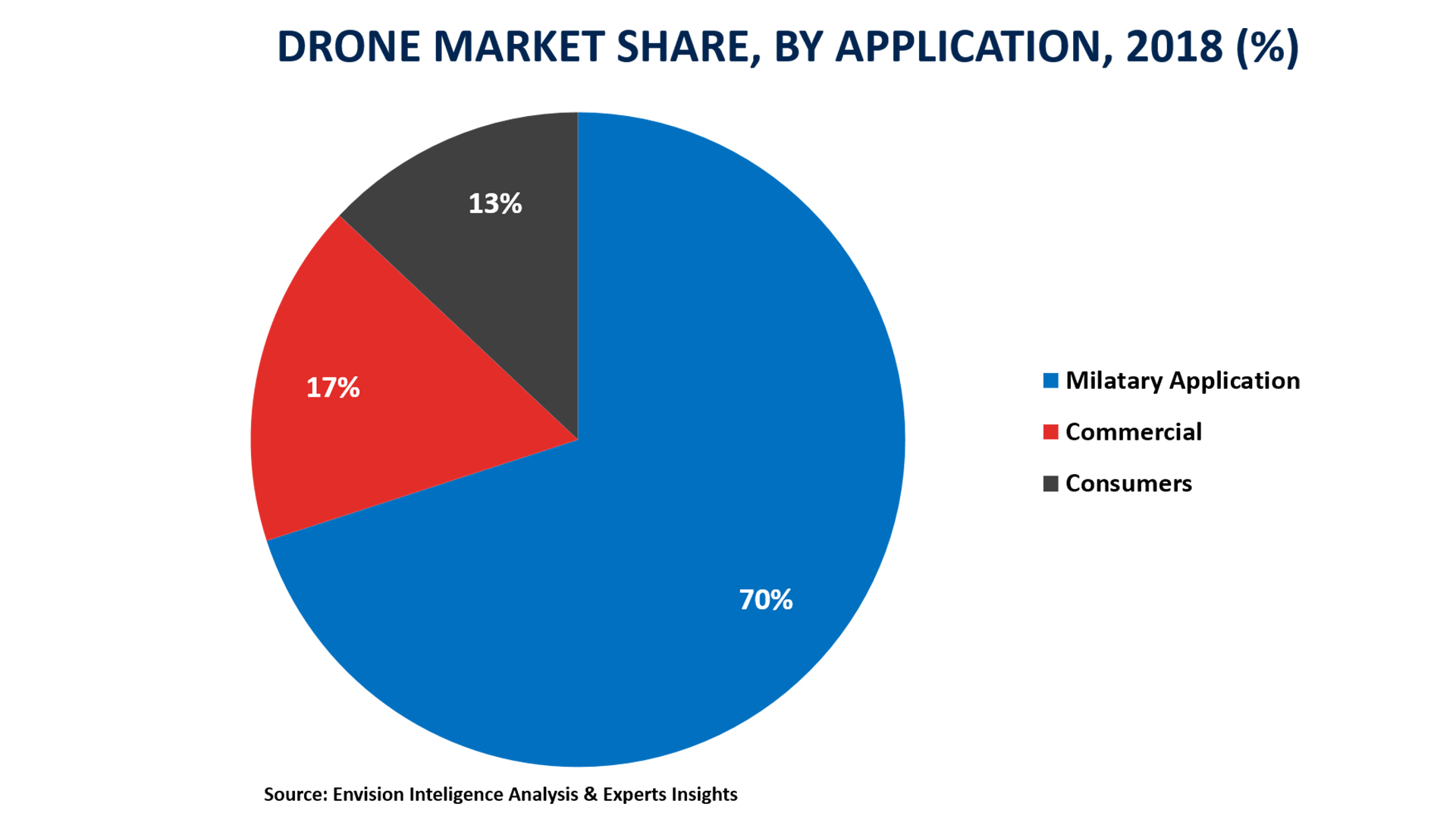 According to the envision Inteligence, drone marker share was dominated by military applications during the forecast period owing to the increasing requirements for the surveillance, target acquisition, reconnaissance and information. Drones market is likely to account for a moderate share in the commercial application owing to the increasing demand from the agricultural sector for the irrigation, soil variation, pest and fungal infestations. Consumer applications accounted for the share of 13% in the drone market owing to the rising usage in the concerts capturing and top view location viewing applications.

According to the drone industry outlook, many of the drone manufacturers are releasing novel technologies and mergers and acquisitions among key players for the development of drone (or) unnamed aerial vehicles are paving the way for the continuous developments in the drones’ industry. Microdrones GMBH partnered with Navigation Electronics Inc. company to provide UAV quadcopter in the south-eastern United States for mapping and surveying process. AeroVironment is delivering the M1/M2/M5-compatible raven and Puma unmanned aircraft systems.  BAE system and Cranfield University developed dual-mode UAVs for armed forces. DJI Company has a market share of 24%, Proprietary has 12% share, Sensefly eBee has 10.02% share, Aeryon has 8.06% share, Gryphon Dynamics has 6% share, Altirian has 5% share, and others are having 23% of the overall drone market value in 2017. 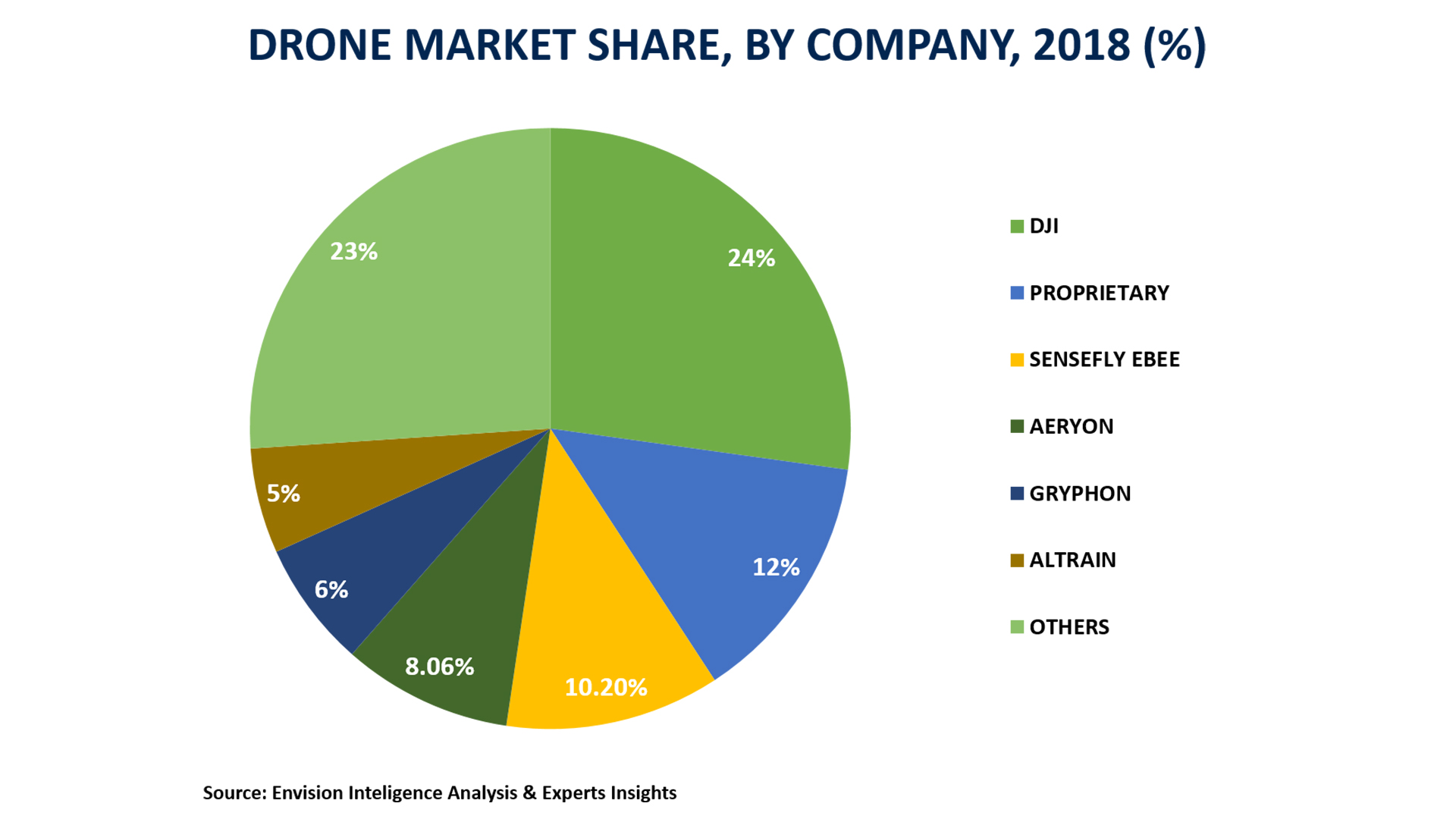 The vertical taking-off and landing drones are being widely used in both the civil and military applications to combat with the most challenging conditions and these drones offer reliable performance, long operational ranges, accurate navigation and high data-rate communication capabilities. Schiebel Company is being involved in providing the state-of-the-art mine detection equipment and the internationally-renowned Camcopter S-100 Unmanned Air System. High-Altitude long endurance is currently operating in the air force and is typically capable of flying as high as 60,000 feet, can endure emissions as long as 32 hours and air force has spent $4 Billion on upgrades. Unmanned cargo vehicle is moderately used in the civil and military applications like remote control toy plane or helicopter for kids, a fully loaded drone with an array of cameras are mainly used in the military applications for armed forces with live video remote communications for ground troops, essential gear or weapons.

Increasing growth in the drone technology and availability of the various types of drones satisfying the current needs in the present scenario. The commercial drone market analysis has to turn out as promising and has the greater demand from the security system in the real estate for creating videos to attract customer attention, inspections and special events. Some companies are enjoying the high market share and profits in the commercial drones’ market. DJI is among the commercial drone manufacturing companies which have the prominent market share. Envision Inteligence drone market report clearly describes the reason behind the substantial growth of drone market as major key players are releasing the novel technological developments and increasing demand for the drones in the military application is boosting the market growth.

According to the Envision Inteligence drone market report, market value is estimated to reach $17.04 Billion with a CAGR of 17.63% during the forecast period 2019-2025. The drone market size has increased due to the emergence of technologically advanced products, promising growth rate of the drone market and an emerging market for location-based services. However, increasing privacy and security concerns and high-resolution satellite imagery is the factors hampering the market growth. There are many other factors which are providing the number of opportunities in a coming couple of decades as the rise in applications areas for GPS, LiDAR, mapping services and increasing growth in the smartphone market. APAC region is estimated to register high growth with a CAGR of 22% in the drone market during the forecast period. China and South Korea have the largest share due to the increasing developments in the uncrewed vehicles with the aim of emerging as a global leader in the sector by 2030. As per the Stockholm international peace research institute publication, results indicated that India is accounting for 25.5% in the world drone imports. Europe region is enjoying the substantial growth in the global drone market during the forecast period owing to the increasing usage of drones in the agricultural sector for farming, irrigation purposes and to enhance the overall farm productivity.